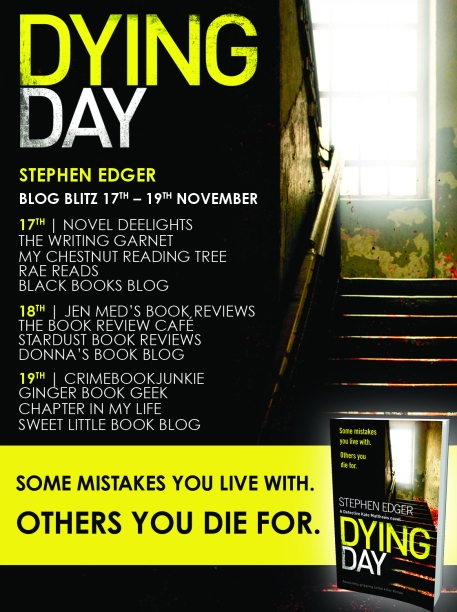 Well this has certainly a busy week for little ole me, another Blog Blitz courtesy of Bookouture and Noelle Holten, an boy am I excited to be included in reviewing Dying Day by Stephen Edger.

Some mistakes you live with. Others you die for…

When the body of a young woman is found in the boot of an abandoned car near the Southampton Docks, Detective Kate Matthews is ordered to stay well away from the scene.

Exactly a year ago, Amy, a junior detective on Kate’s team, was murdered when she was sent undercover to catch a serial killer targeting young girls. Kate never forgave herself for letting the killer slip through her fingers and her team are worried this coincidence might push her over the edge…

When another girl’s body is uncovered days later with similar bruising around the neck, Kate launches an investigation of her own, determined to connect new evidence to the old to catch this monster before more innocent lives are taken…

Mysterious sympathy cards sent to the victims’ families finally lead Kate to the twisted individual from her past. But if she’s found the killer, why does the body count keep rising?

An absolutely heart-stopping crime thriller that will have you sleeping with the lights on. Perfect for fans of Robert Dugoni, James Patterson and M.J. Arlidge.

Oh My, Oh My, Oh My, can someone find my heartbeat Stephen Edger sent my heart into overdrive with Dying Day, a whooping 5 star read and so much more. Well I never, I  thought Dead To Me the first in the Detective Kate Matthews series couldn’t  be beaten or equalled, but Dying Day has surpassed my expectations.

There’s a serial killer on the loose preying on young women, it has all the defining hallmarks of Amy’s killer, but can Kate get her boss to listen. After being warned away from the investigation Detective Kate begins to tread a path of self-destruction with her insubordination, to the point she is almost villainous in her attempts to catch her colleague Amy’s murderer.

Detective Kate is pushing all the boundaries, how far can she go.

The character of Kate is hard to comprehend, she is a hard nut to crack, but of all her flaws and inconsistencies she is in a sense growing on me. Kate is like a dog with a bone (excuse the pun) once she has her teeth into something she wont let go and its to hell with everyone else. I think if we were to step back and look at Kate, warts and all I think we would all see a tiny piece of ourselves in there.

Dying Day is a fast-paced thriller which had me turning the pages faster and faster, absorbing the intensity of the plot. I felt like I was on a roller coaster, you know the saying scream if you wanna go faster, that’s how Dying Day made me feel, but as always nearing the end of the book, I try to throw on the skids to prevent it ending, ultimately I know it has to, I want to know.

Thank you to Bookouture, Stephen Edger and Noelle for an advanced readers copy of Dying Day allowing me to read and review for the Blog Blitz. 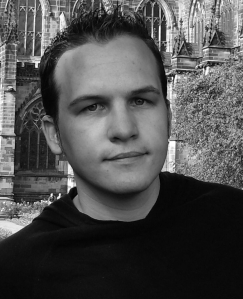 Stephen Edger is a British crime writer, who has been writing since 2010. In that time he has written and published eleven novels, and five short stories. He writes mysteries and thrillers focused on crime.

Stephen was born in the north-east of England, grew up in London, but has lived in Southampton since attending university in the year 2000. Stephen works in the financial industry, and uses his insider knowledge to create the plots of his books. He also has a law degree, which gives him a good understanding of the inner workings of the UK justice system.

Stephen is married, and has two children, and two dogs. He is passionate about reading and writing, and cites Simon Kernick and John Grisham as major influences on his writing style.