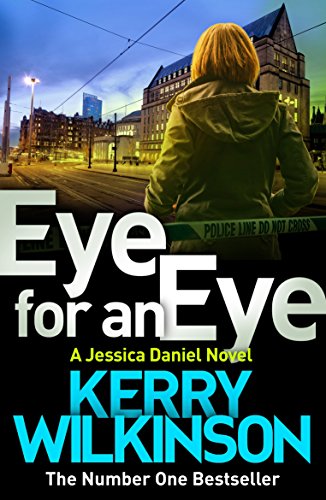 In bestselling crime author Kerry Wilkinson’s Eye for an Eye, DI Jessica Daniel is tasked with multiple investigations while facing demons from her past.

Seventeen years ago, Damian Walker abducted five women because the voices in his head told him to. Now he has been declared sane and is about to be released back onto Manchester’s streets with a new identity.

But within hours, there is another attack similar to his previous ones. Walker has proof it’s not him – but is he reliable, and, if so, who is trying to frame him?

DI Jessica Daniel and her chief are given a parallel task to the main investigation: Keep an eye on Walker – but that’s not all Jessica has to do.

Rock star Blaine Banner is playing a series of homecoming gigs but is convinced someone’s trying to kill him, while a bride-to-be is picketing the police station, demanding someone finds her missing fiancé.

All the while, faces from Jessica’s past are watching and waiting. Someone wants a word…

Kerry Wilkinson has gone and done it again, releasing the 12th book in the Jessica Daniels series, An Eye For An Eye, is there any more that Kerry can publish, a relentless series which just gets better and better the more Kerry writes. If you haven’t read any of the books regarding Jessica Daniels, I would regard it as a must to obtain the full effect of the continuation of the series.

An Eye For An Eye opens with the release of a known serial murderer who killed women seventeen years previously, Walker spent his years incarcerated in a hospital where medication controlled his psychosis. Within a short after his release a murder is committed bearing all the hallmarks of his past crimes, is he stable and no longer a threat or has he committed another heinous crime. Jessica becomes embroiled in the case surrounding Walker supporting witness protection, but also investigating the possibilities that Walker may have pulled the wool over the experts eyes and is not reformed.

While Jessica tackles one investigation, she is compelled to examine another, a rocker Blaine Banner believes he is being targeted and someone is trying to kill him, if this wasn’t enough Jessica’s case load just intensifies, cumulating in three investigations including a missing fiancé.

Jessica’s personal life is still in a perpetual state of turmoil, but her gutsy and strength of character, is what pertains to get her through a day. Jessica in this series has decisions to make which will affect everyone surrounding her. Kerry has built strong characters into the plotline some I didn’t care for but hey ho we can’t all be perfect. If I’m truthful Blaine Banner was a character that don’t sit well with me, maybe because of his childish antics in procuring the services of the police to pander to his insane revelations pertaining to the attempt on his life.

Kerry managed to build a plot which held my attention and had me gravitating to the main investigation but also as light relief the side plots facilitated a smooth transition of different investigative styles that Jessica portrayed according to the scenario.

An Eye For An Eye is a thoroughly captivating book which I couldn’t leave alone, the intense and suspenseful narration had me literally begging for more, roll on the next in the series,

Thank you to Kerry Wilkinson for the advanced readers copy of An Eye For An Eye to read and review in exchange for my honest opinion.

Kerry Wilkinson has had No.1 bestsellers in the UK, Canada, South Africa and Singapore, as well as top-five books in Australia. He has also written two top-20 thrillers in the United States.

As well as his million-selling Jessica Daniel series, Kerry has written the Silver Blackthorn trilogy – a fantasy-adventure serial for young adults – a second crime series featuring private investigator Andrew Hunter, plus numerous standalone novels. He has been published around the world in more than a dozen languages.

Originally from the county of Somerset, Kerry has spent far too long living in the north of England, picking up words like ‘barm’ and ‘ginnel’.

When he’s short of ideas, he rides his bike or bakes cakes. When he’s not, he writes it all down.

Find out more at: