Its now December, all The Silent Children are sleeping, all seen but not heard, waiting on Santa, all tucked up in bed. Mums and Dads invite Carol Wyer in, a tempting bottle of wine and a serial killer thriller, WoW how divine. 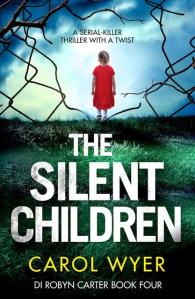 The boy studied the bruise turning yellow at the base of his neck. With quick fingers his mother tightened his tie, and pulled his collar high above it. Her eyes alone said, We will not speak of this…

Years later, a man is found shot dead in a local park. On his phone is a draft text: I can’t keep this secret any longer. The recipient is unnamed.

Detective Robyn Carter knows this secret is the key to the case, but his friends and family don’t offer any clues, and all her team have to go on is a size-ten footprint.

Then a nurse is found in a pool of blood at the bottom of her staircase, and a seemingly insignificant detail in her friend’s statement makes Robyn wonder: are the two bodies connected, and has the killer only just begun?

When another body confirms Robyn’s worst fears, she realises she’s in a race against time to stop the killer before they strike again. But just as she thinks she’s closing in, one of her own team goes missing.

Buried in the past is a terrible injustice. Can Robyn uncover the truth before another life is lost?

An absolutely heart-stopping and compelling serial killer thriller that will keep you up all night. Perfect for fans of Karin Slaughter, Rachel Abbott and Robert Dugoni.

When it was announced that Carol Wyer was releasing the fourth book in the series of DI Robyn Carter I hotfooted it to Bookouture and slapped my name down for the BlogTour hosted by Kim Nash. The desperation to get my hands on a copy of The Silent Children was almost tangible, nothing prepared me for what was to come.

The cover of The Silent Children, fills me with anticipation, a little dread but a huge heap of intrigue, then there’s that opening chapter……

Did someone just open a cavernous space in my mind, I was sucked into the vortex of The Silent Children from the turn of the first page, weaving my way through the words, Carol provoked a response of shock and awe, messing with my head.

The DI Robyn Carter series could easily be read as a stand a lone, but I have read them in order. Each book builds another piece of the puzzle a possibility that we will uncover the truth or is this another illusion that will be kept tightly under wraps.

DI Carter is involved in investigating the death of a local man in an open and popular country area, not much in the way of DNA, but small snips of clues appear, do they bear signification to the latest death, a young woman she appears has fallen down the stairs. A thoroughly tangled web of deceit, screaming out of the pages for me to delve deep into the unknown.

I had a giggle or two when Carol wrote about DI Carter having to share a room with Shearer, I think its quite evident that Shearer has a slight soft spot for Carter, and I think he is hoping Carter will reciprocate. Plenty of niggles, squabbles and banter. But someone else has an eye for Robyn, or is her imagination.

Carol sent me on a wild goose chase, following blindly I tentatively tested each turn, each twist only to be spun around on the red herring roundabout. I was bamboozled, I scratched my proverbial itch, but try as I might Carol blew every suspect I had out the pages, leaving me in utter shock when I everything unfolded before my eyes.

The Silent Children tantalises the taste buds, leaving a surge of pleasure racing through your veins, the words flowing through every area of my brain, weaving in and out, smooth and explosive. If you haven’t tried any of Carol Wyer’s now’s the time, grab a copy, start at the beginning and follow DI Robyn Carter and see if you don’t fall for Carols intense story telling.

Thank you to Bookouture, Carol Wyer and Kim Nash for an amazing Blog Tour, utterly amazing. Id like to that everyone involved for the advanced readers copy of The Silent Children in exchange for an honest review.

Carol E. Wyer is an award-winning author whose humorous books take a light-hearted look at getting older and encourage others to age disgracefully. More recently she has chosen to write for the “dark side” and embarked on a series of thrillers, starting with the gripping best-seller, Little Girl Lost.
Her book Grumpy Old Menopause won The People’s Book Prize Award for non-fiction 2015.
Carol has been interviewed on numerous radio shows discussing ‘Irritable Male Syndrome’ and ‘Ageing Disgracefully’ and on BBC Breakfast television. She has had articles published in national magazines ‘Woman’s Weekly’ featured in ‘Take A Break’, ‘Choice’, ‘Yours’ and ‘Woman’s Own’ magazines and writes regularly for The Huffington Post.
Carol is a signed author with Bookouture and Delancey Press.

To learn more about Carol, go to: